<p>One of the keys to success and happiness is to <strong>always reinforce the good and play down the bad.</strong> Psychologists have long shown that you can use this to "shape" human behavior. But if you want to also be happier, there is little bit more to it.</p>

One of the keys to success and happiness is to always reinforce the good and play down the bad. Psychologists have long shown that you can use this to "shape" human behavior. But if you want to also be happier, there is little bit more to it.

You see, very often we purely live "outcome-directed" and therefore only see and reward the outcome. And this can backfire. Let’s say that, despite a great effort, you fail to reach some goal and then never reward yourself. You may already think that not reaching the goal is undesirable, and by withholding the reward you reinforce the negative experience even more.

As an example, let’s say that you set yourself a goal of loosing ten pounds in two months, and if you do this, you will reward yourself by taking a little weekend trip. And maybe you really try hard but you only loose eight pounds. Now, instead of feeling good about what you achieved (you actually reached 80% of your stated goal!), you feel bad about it.

A better way is to get into the habit of starting to reward the effort itself.

So in the above example, instead of just rewarding reaching the final goal, set mini steps like going on a walk every day, or eating healthier foods; and if you adhere to there ongoing efforts, reward and celebrate those as well! For example, instead of waiting for a big reward two months down the line, reward yourself once a week by doing something that makes you feel good, like maybe going to see a movie. And if you do reach the bigger goal, that should of course also be rewarded as well.

But overall, just try to make the whole process more enjoyable in itself.

And you can even improve on that further. The best way to do this is if you can set it up those little steps so that you greatly enjoy doing them; then you don’t even need to reward yourself, but the doing itself becomes the reward itself. The activity becomes enjoyable intrinsically.

Make your daily activities fun as you go along, and life will be happier.

Be True, Be Happy 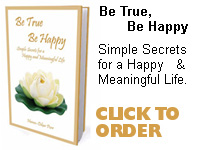 The Steps of Essence 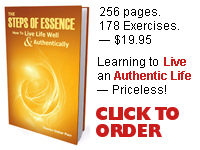